When it came time to drive back to Michigan after a brief stint in Arizona, the first question my husband and I had to answer was “Which way are we going?”. I told him our options were to take the boring route again that we had taken through New Mexico, Texas, and Oklahoma or we could take what I deemed the “fun” route, which would take us through Utah, Colorado, and then some other less fun states. But still, it was less boring than the alternative.

I told him “Actually, we have about 30 seconds to decide.”

Unfortunately for us the point where the boring route and the fun routes diverged were at the entrance to the neighborhood. A half mile into our drive, we had to decide. Guess which route won? The fun route of course! Off we went, north through Arizona toward Utah. After a brief stop in Flagstaff to run and eat lunch, we finally made it to Utah.

At first, it definitely didn’t seem like we had chosen the more fun route. It was desolate and dusty (and then snowy) and we basically saw nothing for the first couple hours. Then we got to Moab. Moab is a surprisingly busy and somewhat large town for being in the middle of nowhere. I suppose that’s no surprise given that Moab is home to two national parks, a state park, and has a huge offroad driving scene. After getting some food and beer (4% ABV as per Utah state law of course) at the Moab Brewery, it was time to plan the next day’s adventure. Since I had just been to the Grand Canyon, the opportunity to visit two national parks in one week was enticing. I knew that Arches National Park didn’t really have much in the way of trails, it was more of a drive your car and park and take pictures kind of place, but there was one trail I thought would be worthwhile.

All the way at the back of Arches NP, there’s a campground and a trailhead for Devil’s Garden and the Primitive Trail. Combined together these two trails are supposed to be about 7 miles and you’re supposed to see a ton of different arches. Perfect, I thought, for a short excursion before getting back on the road. Leaving the trailhead, the trail is a wide, crushed gravel path packed with people. Even though we had gotten there pretty early in the morning and it was kind of chilly, there were already plenty of people out. After seeing Landscape Arch, we hopped on the Primitive Trail in order to get away from the crowds.

According to the NPS, “the primitive trail is most difficult. Expect difficult route finding, steep slopes, narrow drop-offs, and rock scrambling.” The trail is supposedly marked with cairns although we didn’t see many, at least in the beginning. It probably doesn’t help that some of the cairns are about six inches tall. Immediately after turning onto the primitive trail, we found ourselves with a group of people who didn’t know where to go. “I think we’re supposed to scramble up that rock face.” The group seemed skeptical but I checked Trailforks which had a dotted line for this trail and confirmed, we were supposed to go up. At the time, it seemed like kind of a sketchy scramble, but as it turned out there were steeper and more exposed stretches later on down the trail.

We continued on while route finding and occasionally leading others off trail on accident. We saw some more arches, but for both of us our favorite part was the scrambling, the exposed sections, and the general views of cool rock formations. 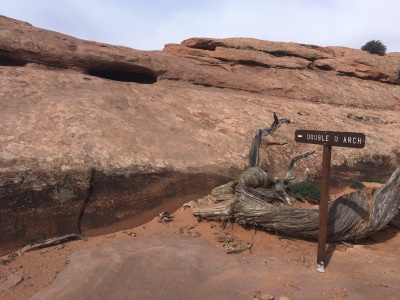 one of the few signs on the trail 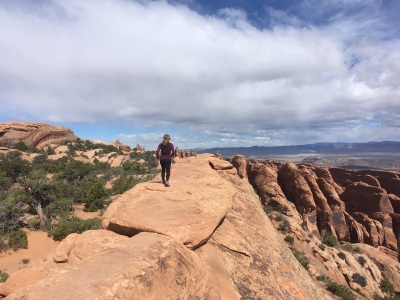 Overall, this was a cool excursion since it was basically on our way. I can’t say I would go out of my way to go to Arches NP again since it’s not really my style. I much prefer places where you can get out on the trail and experience things instead of just taking pictures of stuff from a parking lot. If you ever find yourself in Moab with a couple hours to kill and aren’t afraid of some exposed trail and a little route finding, you’ll definitely have fun here.

I call those things in the distance Dr. Seuss rocks