After a successful first day of Trail Weekend, Day 2 dawned pretty much the same with one slight difference. There was actually sun this time! Despite the sun though, it was still cold and windy and I spent a while debating on my outfit. As Sunday’s race was 50 kilometers, I knew it would be much warmer by the time I finished. Still, I couldn’t quite bring myself to wear shorts and a tank top from the start since the wind chill was only in the high 20’s. I decided to start out in warmer clothes and then change into other clothes later on if needed.

Just before heading to the start line, I saw someone who looked mysteriously like my college friend/former roommate walk by me. I yelled his name and started running toward him before I was 100% sure it was him. Thankfully, it was. Otherwise it would’ve made for a pretty awkward hug. Even though he lives in the area, I was surprised to see him there because he is a super fast swimmer and triathlete and not so much a trail lover (or so I thought). It was about one minute before race start at this point and he informed me he still had to go collect his bib so I left him to it. At the start line, I was excited to find that the 50k/marathon crowd was significantly smaller than Saturday’s half marathon. Hooray for having more space! 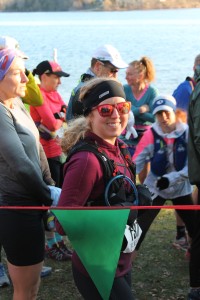 A mile or two into the race when there was still a decent size “pack” of us running together, I felt someone elbow me in the side multiple times. I was about to tell whoever this idiot was to either go by me or get back behind me before I realized it was my friend I had spotted earlier. He had thought the race started at 8 instead of 7:30, which explained his tardiness in picking up his bib. Despite starting the race a few minutes late, he had already caught up with me. Not having seen each other in several months, we ended up having plenty to talk about over the next 20ish miles. I knew he was basically jogging to keep pace with me so I told him to feel free to leave me in the dust at any time, which he did eventually with 10k to go in his marathon.

My plan for this race was to run the first 13.1-mile loop at a relaxed pace, the second one hopefully at the same pace, and then just go as fast as I could for the last 5 miles. I told my husband who was on sherpa duty to expect me to finish each half marathon loop in about 2:15. At 2:13, my friend and I finished our first lap and I decided to do a wardrobe change into shorts and a t-shirt, and I was so glad I did.

As we continued on to our second loop, I was still feeling great and started to think that the day might have potential to be a huge PR. I kept focused on eating and drinking Coke on loop 2 as well as using the downhills to pick up a little extra time. Around mile 20, my friend decided to go ahead on his own for his final miles to the finish. Thirty seconds after he went ahead, I decided to get a picture of him but he was already just a speck in the distance. For the last couple miles of loop two, I decided to pick up the pace as well in preparation for the final 5-mile “sprint”. I came through the start/finish area after 26ish miles in exactly 4:30, right on my predicted pace. My goal for the day had been to finish in under 5:30, and it was at this point I realized I had the chance to shatter my goal with a good last five miles. I ditched my pack as I came through for the last lap and had one last swig of Coke.

The last five miles ended up being the fastest five miles I’ve ever run in an ultra. Looking at the results afterward, there were only a few people who ran the last loop faster than I did, and all of them finished way before me. Oops. Maybe I should’ve started running faster earlier. At any rate, I was cruising through the last few miles, including up the “giant hill” one last time. I passed several people on the last loop but had no idea what race or lap these people were on as the shortened loop merged with the longer loop at some point. Having had the benefit of running the final stretch of the course three times in the previous two days, I knew when I was getting to the close and gave it everything I had to the finish. According to Strava, I was running 5:45 min/mile pace when I crossed the finish line. This led to some really attractive finish line photos and also a huge PR of over 30 minutes compared to my last 50k. While every ultra course is different and it’s hard (impossible, actually) to compare times across courses, I think it’s safe to say that I’m probably at least in slightly better shape than I was a month or two ago. After the struggle that was the Glass City Marathon the previous weekend, I was super excited to have a race where everything went right. It definitely helped to have someone to run with to keep me moving a little bit faster in the early stages of the race. Being so familiar with this trail and the course definitely was a benefit as well. Most of all though, I just had a fun day being on beautiful trails. I think anytime you can enjoy yourself in a race, you’re going to have an awesome day and for me, that means being on trails, not a flat, paved road or sidewalk. 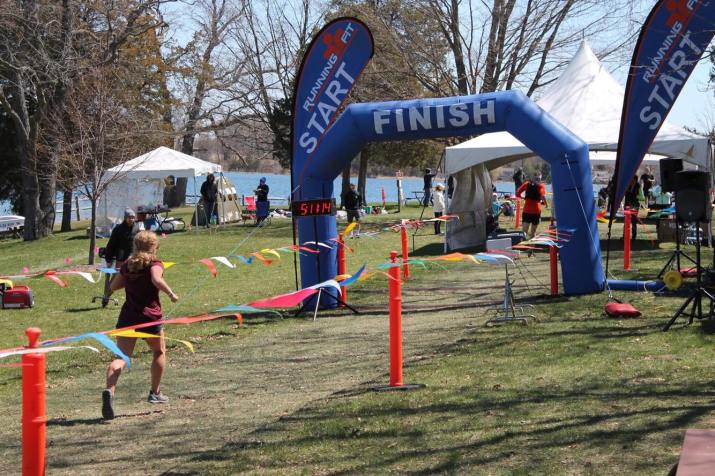 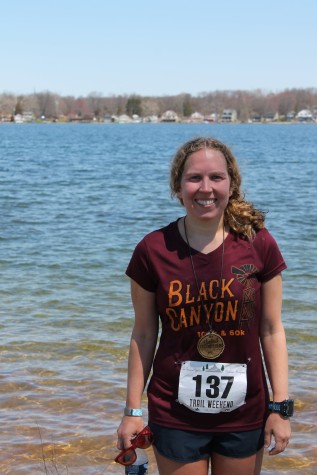 2019 was one of the hardest years of my life. This year I’ve learned that friends and family come and go but thankfully the mountains will always be there 💚 🏔#aspencolorado #mountains #trailrunning #ultrarunning #skiing #sisu #skinning
Welcome to Colorado, where you experience two different seasons in the same day just 40 miles apart 🏔❄️☀️#trailrunning #hiking #roaringforkvalley #aspencolorado #ultrarunning
Mountains + friends = 💚💚💚 #boulder #hiking #optoutside #coloRADo #trailrunning
Making the most of what little time we have left before the ❄️ really starts flying #trailrunning #hiking #colorado14ers #laplata #runsteepgethigh #sawatchrange #ultrarunning
Four pass loop round 2! It was even more epic with the fall colors and @peakbagginprincess for company! #trailrunning #ultrarunning #maroonbells #fourpassloop #coloRADo #optoutside #runsteepgethigh
There’s something fantastic about finishing a run in a completely different place than you started. I love that my town is only a 20 mile adventure away from crested butte. Excited to make the return trip tomorrow with @peakbagginprincess #trailrunning #maroonbells #aspen #ultrarunning #crestedbutte #runsteepgethigh
%d bloggers like this: