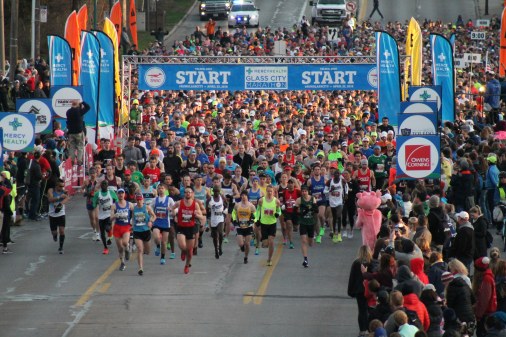 Where to begin with this one… I signed up a few days in advance for a road marathon in Toledo, Ohio. After spending the first 3.5 months of the year running big miles on big mountains, I wanted to see how my trail fitness would translate to a flat, fast road marathon. If I can run for 12+ hours up and down mountains in the desert with relative ease, surely I should be able to run my way to a new road marathon PR, right? The only catch really is that I haven’t really pounded the pavement much this year. Of the 700+ miles I had run so far this year going into this race, approximately 30 of them were run on the road. No matter though, this was going to be great.

I chose this race primarily because it was soon and it was close enough to home that I could sleep in my own bed the night before. I originally wasn’t planning on driving down until race day but once I looked up the location of race day packet pick up (a mile from the start line) and all the parking restrictions on race day, I decided to just drive down the day before to get my bib. And I was glad I did, primarily because I discovered that one of the most traveled sections of highway in Southeast Michigan is shut down. I’ve been afraid to do more research on just how long it’s closed but I can guarantee it’s months, possibly even years and I’m not exaggerating. Closing sections of expressway in Michigan for years at a time is actually a thing. But anyway, after an hour and 40 minute drive that should’ve taken and hour and ten minutes, I finally arrived. It was just like every other marathon expo I’ve ever been to: loud and crowded. Guess what one of my least favorite things is? Crowds. I got out of there in about five minutes asking myself why I had decided to sign up for this again. 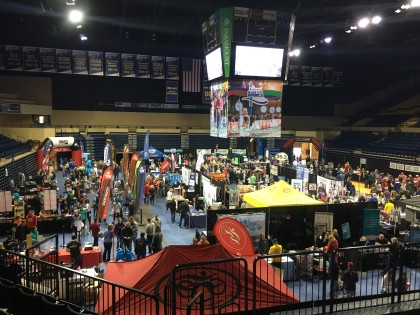 Race day dawned bright and early and my sherpa, I mean husband, and I were on our way. There was a ton of traffic near the University of Toledo campus where the start/finish was, so we ultimately parked in a neighborhood just off campus. After waiting in the requisite super-long bathroom line and dropping my bag off at gear check, I went to the starting line, since it was now about 10 minutes before race start.

I lined up between the markers that said 7-minute and 8-minute pace, expecting to run 7:30’s. The gun finally sounded and we took off at a jog. I never understand why people ignore corral/start line assignments, but at every road race there are always plenty of people who just start wherever the hell they feel like. Bumping around with thousands of my closest friends in the first 400 meters was really really making me question why I was doing this. I mean yay, I’m having so much fun!

Thankfully I started to get some more space as we went on although I was still looking forward to mile 8 when the half and full courses diverged. Running 7:30’s was feeling pretty comfortable and I was confident things were going to go well. But of course all good things must come to an end right, and mine pretty much ended around mile 14. I came through the half right on pace in about 1:40. Unfortunately this “knee thing” I’ve had going on for awhile did not appreciate being repeatedly slammed against unforgiving asphalt and concrete. I knew it wasn’t going to subside and would probably only get worse, so I came up with Plan B, which was to go for a BQ. I’m not even sure whether I want to run Boston next year but if this was going to be my one and only road marathon for the year (because let’s face it, I wasn’t exactly having the time of my life), I decided I might as well at least try to salvage the day with a BQ.

From miles 14-25, I jogged/hobbled/walked my way forward. My right knee issue was causing me to run with a really weird gait that was leading to my left quad locking up and also a blister on my left foot in a place where I’ve never in my life gotten a blister. I was a pretty sorry sight. Marathoners and relay runners were passing me left and right. Usually in races, I run even or even negative splits and am usually passing people towards the end. It was a humbling experience to be literally giving it everything I had while feeling like I was barely moving. I thought several times about throwing in the towel on my BQ attempt, and walking or jogging ever more slowly into the finish, but I knew I wouldn’t be able to live with myself if I didn’t at least try. If it wasn’t enough, fine, but at least I had tried.

It was right around this time there was another runner near me whose husband had been waiting for her at a road crossing. She told him “I can’t do it, I can’t do it.” Based on the time the clock was at, I’m guessing she was trying to go for a BQ as well. If I had had any extra energy to spare I would have told her, “You know what, maybe you can’t. But maybe you can. All you can do is what you can do, and if it’s not enough, it’s not enough. All you can do on any day is give it your best effort and that means not giving up until it’s over.” For me, when I know I’ve given it everything it a race, I will always be satisfied regardless of what the clock says or what place I come in. Sometimes we have great days, but sometimes we drink too much beer the night before a race (not that I’ve done that), or go into a race with a nagging injury or illness. On any given day your best effort is enough because it’s what you can do.

But enough philosophy for one day. After a long, grueling journey I had finally reached mile 25. I decided to just run as fast as I could to the finish and see what happened. Thankfully there was a slight downhill, also I guess considered a significant downhill in Midwestern road marathon terms. The race finished on the 50-yard line of UT’s football field so the last few steps were on astroturf. I crossed the line with an official time of 3:32:07, a far cry from the 3:20 I was hoping for, but technically a BQ (but still only fast enough to gain entry into Boston in 2012-2017, not so much this year in 2018).

After laying on a bench and then laying on the ground for a while, I decided to go in search of my drop bag with warm clothes and some food. They also had this nifty BQ bell to ring. On the roughly mile long walk back to the car, of course my knee barely hurt at all. I guess it’s only upset when I’m exerting a force of 7x my body weight on it. 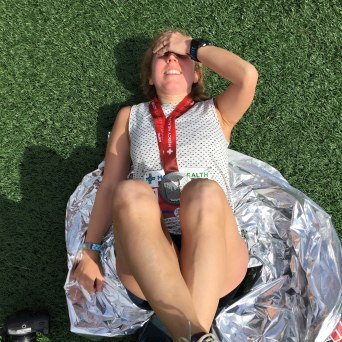 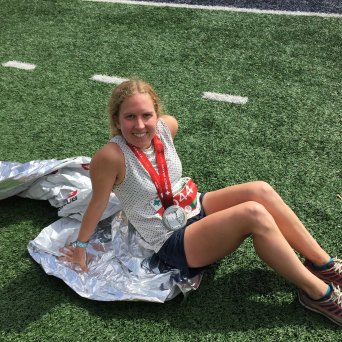 At the end of the day, like I said before, I can’t be disappointed with my performance in this race because I did everything I could do on the day I was given. Do I wish that my body had agreed with my idea to race a road marathon and that everything else could’ve gone perfectly and I skipped away merrily with a PR? Of course, who wouldn’t want that. But the reality is that very few races follow that story. And let’s be honest, the most memorable races are never the ones that feel effortless or where you ran the fastest, it’s always the ones where you have to endure aches and pains, upset stomachs, foul weather, and just general bad days.  After all, if running was easy, no one would do it. 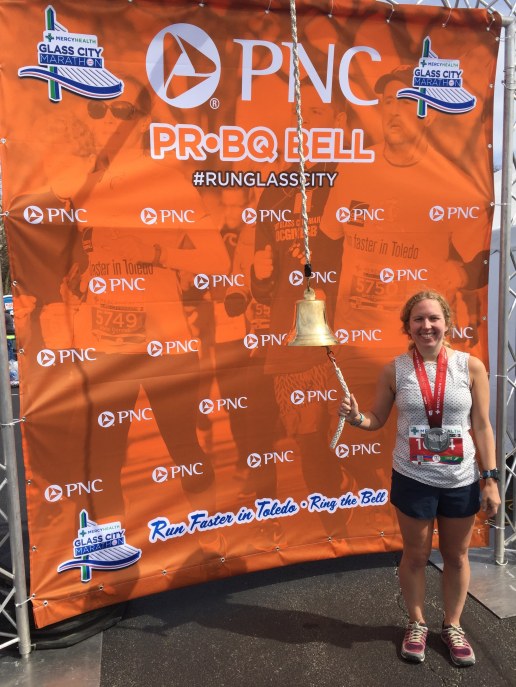 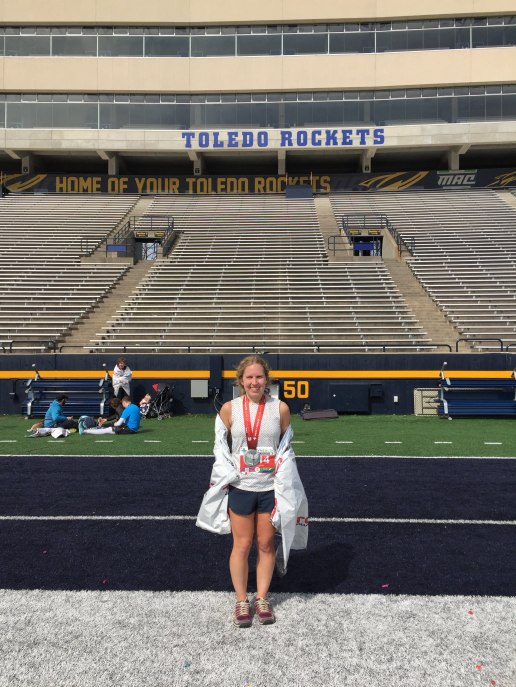