At the beginning of our trip to Colorado, I didn’t really have any plans to climb a 14er. But after the 416 fire foiled our initial backpacking plans, our trip turned into a choose your own adventure planned with the advice of helpful Coloradoans. During a brief stay in Carbondale, we mentioned that we were looking for ideas for what to do after our Conundrum Hot Springs backpacking overnight before driving back to Denver. The guy at the local running/hiking shop where we were looking for trekking poles suggested a 14er and rattled off several that were in between Aspen and Denver. I tried to remember what all he said but I’m pretty sure I forgot most of it. All I really took away from our conversation was “Mt. Elbert” and “driving over Independence Pass is way more fun than I-70”. When I looked up Mt. Elbert, I saw that it was near Leadville, home of the famous Leadville 100 ultra and mountain bike race. At an elevation of 10,152′, Leadville is also the highest incorporated city in North America. If all those things hadn’t already sold me on a trip to Leadville, the fact that it’s an old mining town with none of the glitz and glamour of nearby ski towns sealed the deal. I was more than ready to trade in rich people and fancy shops for outlaws and 150 year old houses.

Before I could climb Elbert, first we had to get to Leadville. Remember how the guy in Carbondale said driving over Independence Pass was fun? Yeah, well that’s not exactly the adjective I would use to describe riding in a car at 12,000 feet on the edge of a mountain with no guardrail and a bunch of other cars that can’t seem to drive in a straight line. While terrifying, the drive was definitely beautiful and thankfully we made it to Leadville in once piece. As soon as we arrived, I knew I was going to love it. Pretty much every building in Leadville is at least 100 years old and there aren’t 50 meter maids out ticketing people the second their parking expires (cough cough Aspen). A trip to one of the local watering holes, Periodic (Pb) Brewing (get it?) where we drank delicious beers, chatted with locals, and watched the Stanley Cup Finals followed by a pizza from High Mountain Pies pretty much confirmed it: Leadville is Heaven on Earth.

When people ask what’s a “good” 14er for someone’s first one, a lot of times Mt. Elbert gets thrown out there. It’s a class 1 hike all the way to the summit, the trailhead is easy to get to, and you’re sure to have plenty of company. Despite the fact that many people consider it an “easier” 14er, it’s still 4700′ of gain in 4.5 miles (via the North Elbert Trail). And then of course, you have to go back down, which is a lot less fun than going up in my opinion. Depending on who or what website you consult, it takes the majority of people 6-10 hours roundtrip. In the interest of my fellow plane passengers, I was hoping to do it in 5 or less so that I could take a quick shower afterward.

Since our flight departed Denver at around 5pm and we were at least two hours from the airport, I knew I was going to have to get an early start if I wanted a successful summit. I set my alarm for 4am hoping to be on the trail at first light at 5. It seemed that everyone else decided to sleep in that day, because I was one of only six cars in the parking lot when I started up the trail at 5:30. On the drive in, my car thermometer had read 27 degrees but I felt pretty comfortable in shorts, a tank, a long sleeve, and a rain/wind jacket. The huge temperature swings in Colorado were something that really surprised me. It can be 30 degrees at 6am, but by 9 it’s almost 70. The key is to have lots of layers and I used all of mine.

I wasn’t really sure what to expect trail-wise, but the first couple miles up to the treeline were pretty tame compared to what lay beyond. You just kind of gradually switchback through a forest for awhile. In hindsight, I probably could have run the first couple miles, but I didn’t want to risk sacrificing reaching the summit because I was trying to gain a few minutes. Because of this, I settled for a brisk walk. Even though the entirety of the hike is above 10,000 feet, I felt great on the first section simply because I wasn’t carrying a 25 pound pack on my back. After four days of backpacking, I felt positively light, even at 14,000 feet. 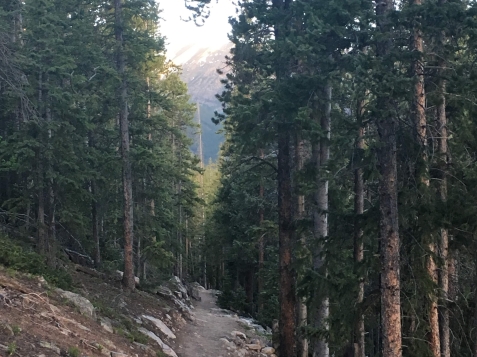 I didn’t see many people on the way up as so few people had gotten an early start, but I did pass around 10 people. My trekking poles that I had gotten a few days earlier at an outdoor consignment shop were proving to be the best investment of my life. At times, I was pretty much using only my arms to pull myself up the mountain. There’s one section in particular that’s about a mile from the summit that looks like a wall. It’s about a 35-40% incline up loose dirt and rocks. I wasn’t looking forward to going back down this section. Honestly, I’d take scrambling over a loose, 40% controlled fall any day. But anyway, I was still going up. As I began the super steep section, there were two guys in their late 20’s who were each carrying a large rock (~10lbs) presumably from the summit. I was simultaneously amazed that they were able to go down this section with a giant rock in their arms and also angry at them for not practicing Leave No Trace principles. Leave it where you found it, people!

The way up has a few false summits before you reach the actual summit and at the last one it seemed as though a few guys thought they had reached the top already. I wanted to be like “Uhh, guys, we’re going to the highest point in Colorado. Those rocks over there are above us so…” Instead, I just kept climbing the last little bit, leading the way. Just before I reached the summit, there was a group coming down. Since all the people I had passed were still behind me, I had the summit all to myself for about two minutes during which I was the highest person in Colorado (altitude-wise of course). After I quickly snapped some photos sans people, everyone else arrived and they were all very prepared to hang out on the summit. People pulled out down jackets, beers, herbs, and snacks, and settled in to enjoy the views. Since I was still hoping to shower, I only stayed long enough to eat a granola bar and have someone take a non-selfie of me. It had taken about 2 hours and 45 minutes to reach the top and I lingered for about 15 minutes which meant I had about 2 hours to make it back down.

As I began making my way down, I saw more and more people coming up. Here were the crowds of people I had been told to expect. There were families, children, dogs of all sizes, old people, young people, fit people, not so fit people. So. Many. People. My plan was to hike/roll my way down to the treeline and then run the rest of the way down. On the super steep section on the way down, some guy going up advised me to put away my trekking poles. Uhh, no thanks, these things just saved my life. Twice. After the steep section, the way down was mostly uneventful. I kept stopping to remove layers until I was just in shorts and a tank top. I reached the now crowded parking lot just under 5 hours after I had begun. Just in time to take a shower!

Climbing Elbert was definitely a memorable experience. The view from 14,000 feet is unlike any of the other things I saw in Colorado. However, there wasn’t a whole lot to look at on the way up. Trail-scenery wise, there was plenty more to look at on every other hike and run we did. I understand though that a lot of people don’t climb 14ers for the journey, they do it to check another thing off their list. I’d like to try a more technical 14er on a return trip just to see what it’s like though. The good news is, if climbing 14ers doesn’t turn out to be my favorite, there’s plenty of other things to do in Colorado.

If you are thinking about climbing Elbert or any other 14er for that matter, here’s some tips: 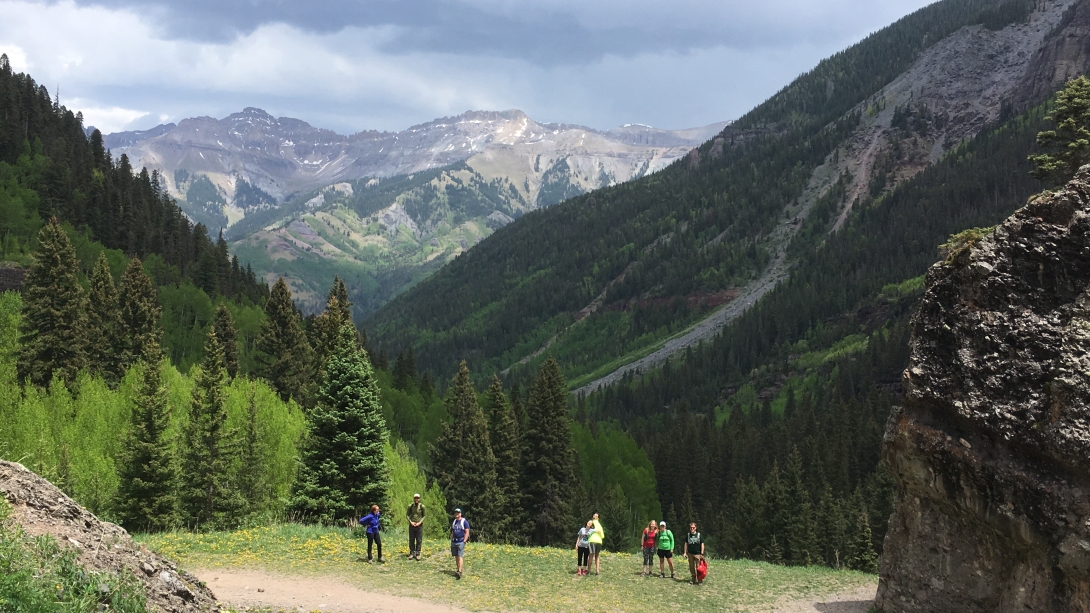 My husband and I recently returned from a week long trip to Colorado. While the primary reason for our trip was a friend’s wedding in Telluride, the decision to extend our trip into a longer adventure seemed like a no-brainer. During the week we managed to squeeze in a wedding, multiple backpacking trips, trail runs, hikes, and visits to towns less traveled. While every single trail and mountain and lake we saw in Colorado was amazing, there are plenty of less specific things that make the Centennial State one of my favorites. And I’d be lying if I didn’t say part of the reason I’m making this list is to convince my husband of my (not so) secret plans to move there someday. So without further ado, here are my seven favorite things about Colorado:

What are your favorite things about Colorado?